The Office of the City Clerk supports the City’s goal of transparency by preserving and providing public access to Council-approved documents, promoting City-wide compliance with records retention laws and facilitating the legislative process.

The City Clerk’s office is the custodian of the City’s official records, including ordinances, resolutions, deeds, contracts, leases, easements, annexation proceedings, petitions and minutes of City Council and other official bodies; serves as a public notary, processes all notices for publication; receives competitive bids and records minutes of the official bid opening sessions. The City Clerk conducts elections held every four years to elect the Mayor and City Council members. 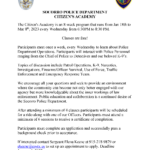 To submit a public comment to be read at the beginning of the following City Council meeting, please fill out the Public Comment Form below or download it here. Submitted forms are considered public record and searchable under Open Records Requests.

This form is for people who wish not to speak at the city council meeting but would rather express his/her opinion in a written statement. All comment forms should be submitted before the end of the meeting. Comment forms will be distributed to each council member.

How do I submit Open Records Requests?

What are records of retention?

You are now leaving City of Socorro Texas

City of Socorro Texas provides links to web sites of other organizations in order to provide visitors with certain information. A link does not constitute an endorsement of content, viewpoint, policies, products or services of that web site. Once you link to another web site not maintained by City of Socorro Texas, you are subject to the terms and conditions of that web site, including but not limited to its privacy policy.

You will be redirected to

Important information regarding the COVID-19 Pandemic can be found here.

You Have Successfully Subscribed to the Newsletter