Welcome to the City of Socorro: The City with a Mission!  The City with a Mission, home to the bi-national historically significant Rio Vista Bracero site, we are rich with culture and diversity! Socorroans have the luxury of extensive city amenities without big-city hassles. High quality of life is provided by affordable housing, low crime rates, and minimal traffic congestion on major thoroughfares and interstate highways. We welcome all to find out for themselves why Socorro is one of the best cities.

what is historic preservation?

Historic preservation involves the act of recognizing places from our past that are important to us, caring for those places by utilizing the most appropriate treatment, and then continuing to use them in ways that enrich our lives.Historic places are IMPORTANT because they represent cultural & architectural heritage, establish a unique sense of community, instill a sense of community proprietorship, enhance local property values, encourage tourism, and foster economic growth and development.Preservation can mean many things to different people. It can be about acknowledging the important stories around you and then working to preserve them. It could also be about physical places and items such as buildings and clothes, or sites such as Native American lands. Or it can be about material conservation such as siding repair or cultural heritage initiatives like oral history projects. Please watch the What is Historic Preservation Presentation (Video) to learn more about historic preservation and its history in the United States.

Why this is important:
Understanding the basics and history of preservation is important because a framework is needed in order to implement an effective preservation program and to educate others on its importance.

This all came about after the 1680 Pueblo Revolt, in northern New Mexico. The Spanish were driven from the north and moved into the area with their Native American Allies. Two years later they built Nuestra Señora de la Limpia Concepción del Socorro Mission. But the first permanent mission structure was swept away in the Great Rio Grande Flood in 1744.
Determined settlers built a second church and it too was washed away in 1829 when the Rio Grande flooded and receding waters cut a new channel.

The present Socorro mission was opened in 1843. Eventually, a struggling and gritty community of 1,100 settlers built up around the mission.

The City of Socorro was actually a part of Mexico from 1821 to 1848, but as the result of the bloody US‐Mexican War, it went over to Texas. The secret to its lasting development was its “acequias.” They provided water for crops and vineyards.

The growing City of Socorro was derailed in 1881 when the railroads laid their track all the way to El Paso and bypassed Socorro shifting the political power to El Paso. In fifty years Socorro’s population was 2,123 but bigger farms and industrialization of the farming business dropped the population to 350 by 1941. The resolute citizens were determined to stay in the area for decades. Then, suddenly in the 1960s and 1970s, the population grew rapidly.

Unscrupulous developers built homes in residential subdivisions that did not have paved streets, water, or sewer lines. The City of Socorro residents again raised up against the builders of these colonias—. The fight had to refocus against El Paso County who wanted to take over the City of Socorro. In 1985, the threat of annexation of the entire town by El Paso sparked an uproar that resulted in the reincorporation of Socorro. The unwavering Socorro residents blocked El Paso’s plan to annex the city and Socorro has continued to grow with the same determination and grit.

The City of Socorro hosts a commission for all modifications, developments, and changes being requested to any property which is in a Historical District or is a Historically Designated property. The commission is made up of community volunteers who review applications once a month for the request to change the property’s aesthetic, design, or architecture. The commission meets regularly once a month unless otherwise indicated in the public meetings calendar.
All HLC applications are reviewed against the federal government’s standards of the Secretary of the Interior, the guidance from the State Historic Preservation Office, the City’s Historic PReservation Ordinance and lastly the City’s Design Guidelines.

The commission is dedicated to preserving, promoting, and protecting the rich cultural heritage of Socorro, and wished to work with every property owner to make each project an improvement to the City. Please reference our resources for some introductory information to Historic Preservation and approved off the shelf solutions.

You can also look at the existing tax incentives for developers and property owners looking to make improvements. Federal Programs such as Historic Tax Credits, Facade Grants, and the county incentive policy are all great resources at your disposal.

The City of Socorro is currently in the process of completing its first capital improvement program with over 1 Million dollars being invested into the City’s State Antiquities Landmark: Rio Vista!

The Rio Vista Complex is a 16 mixed material building complex who’s most historical significance is for the home to the Bracero Program! One of five processing sires, and the last remaining complex, Rio Vista has a long and rich past with bi-nationally significant history. Through the assistance of the National Trust for Historic Preservation, and the Texas Historical Commission the Rio Vista Center is poised to house the City’s first public library, economic development incubator, conference space, and health & wellness retreat.

Phase one began in 2015 with emergency stabilization and minor rehabilitation being conducted on the operable buildings which it concluded in 2018.

In 2019 Phase 2 began with the awarding of planning and design services to Treanor HL to begin with the uninhabited and previously inoperable buildings in the back. Due to the COVID-19 pandemic, the project was put on hold for most of 2020. Recently the city returned to work on the project with Treanor HL staying on the project. This phase of work will entail planning and construction documents which will then lead onto phase 3 of the project: construction. Phase 2 is set to wrap up in 2022

The City through the awarding of a federal grant from the National Park Service, the City of Socorro with the help from Front Range, National Trust for Historic Preservation, and Texas A&M are in the process of applying for National Historic Landmark designation from the federal government by way of the Secretary of the Interior. This designation would elevate the current State Antiquities Landmark, to that of: Alcatraz Island, the Empire State Building, and the Alamo. Work is set to finish in 2021 with the application being submitted and up for review in July of 2021.

The online film” Harvest of Loneliness depicts a snippet of the rich history of the site.
You can also check out the Rio Vista Guidebook’ a product of the collaboration with the National Trust for Historic Preservation, the University of Texas at El Paso, and the City of Socorro. 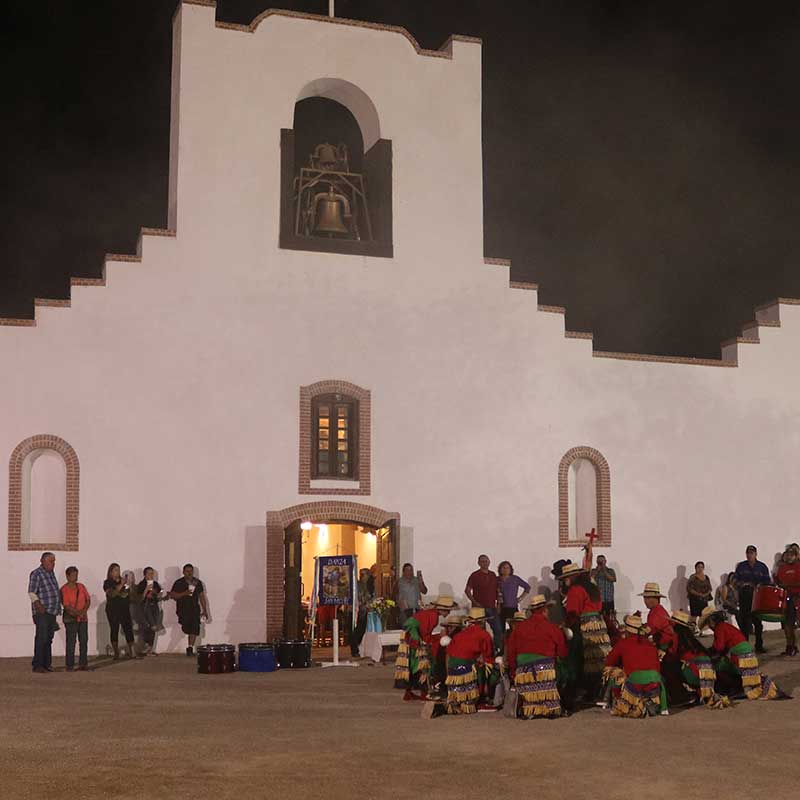 Weathered wooden crosses and marble headstones punctuate the cemetery that fronts the graceful stepped facade of the 1843 Socorro Mission. Located in the center of a string of three historic church sites, Socorro Mission rises in the West Texas skyline as one of the Southwest’s best-preserved examples of mission architecture and a place of profound Catholic faith. In 1740 a flood destroyed Socorro del Sur’s 1691 church. Within four years, the Piros had rebuilt the mission, which now served a community of Indian and Spanish residents who, instead of returning to New Mexico during the Spanish reclamation of 1693, set down permanent roots on the south banks of the Rio Grande.

Casa Ortiz, located on the Mission Trail in Socorro, exemplifies the simple structures of locally available materials built on the Spanish Colonial frontier. Reputedly constructed in the late 1700s with adobe walls and roof supports called vigas and latillas, it now houses The Bookery, an independent bookstore. In the 1840s, the house belonged to José Ortiz, a trader who carted salt from the salt flat at the foot of the Guadalupe Mountains along El Camino Real de Tierra Adentro, and traded knives, sarapes, and other goods with Native Americans. 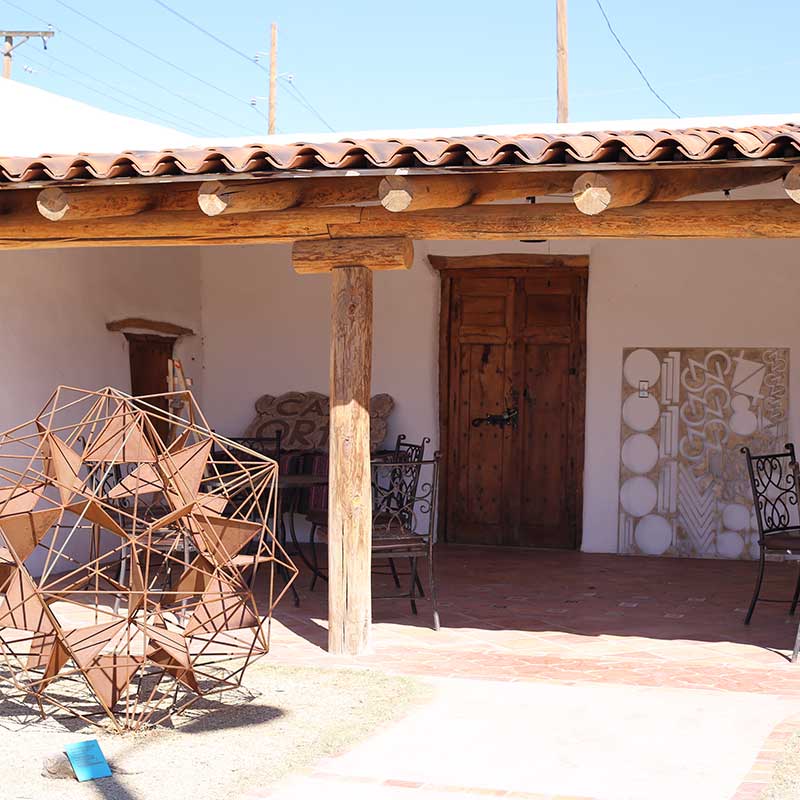 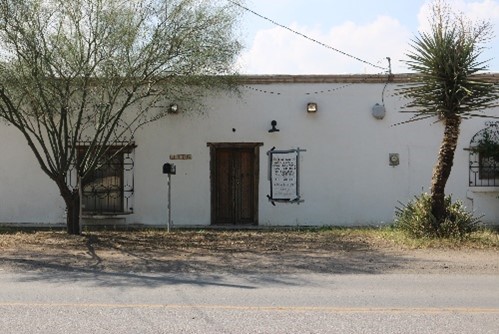 Built in 1900, this historic building was once the area’s first silent movie theatre that opened in 1902.  The world premier showing of the original Pancho Villa silent movie that debuted in 1919 was shown here. Currently, Casa Apodaca only opens for special historic tours. 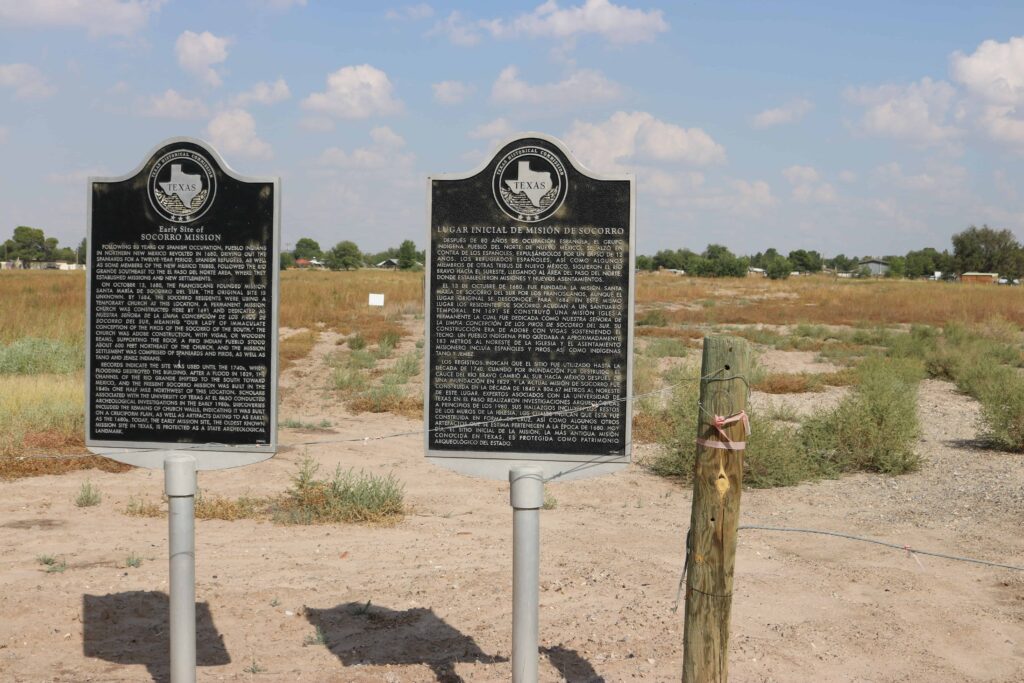 Special Report: Braceros on the Border

If these walls could talk 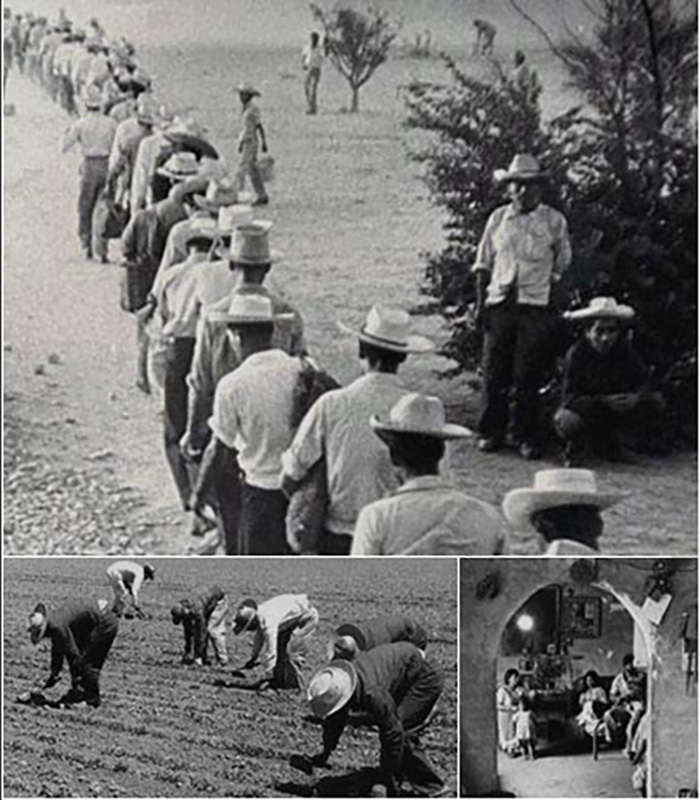 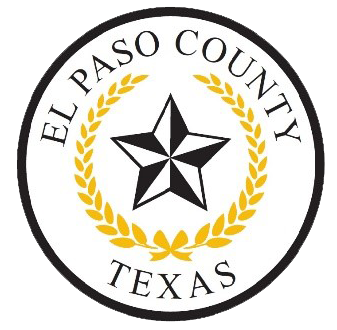 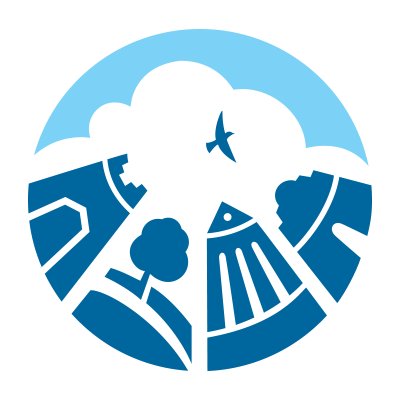 You are now leaving City of Socorro Texas

City of Socorro Texas provides links to web sites of other organizations in order to provide visitors with certain information. A link does not constitute an endorsement of content, viewpoint, policies, products or services of that web site. Once you link to another web site not maintained by City of Socorro Texas, you are subject to the terms and conditions of that web site, including but not limited to its privacy policy.

You will be redirected to

Important information regarding the COVID-19 Pandemic can be found here.

You Have Successfully Subscribed to the Newsletter